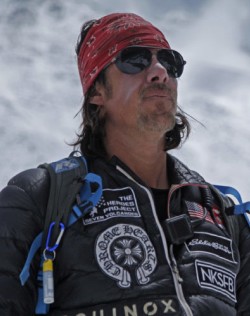 Tim Wayne Medvetz has always sought adventure. Born and raised in the Great State of New Jersey, Medvetz realized early in life that he wanted to see the world—and see the world he did. A lifelong wanderer, nomad and natural extreme athlete, Medvetz has traveled all over the world. In 1998, he rode his chopper across the country to Los Angeles. Here he parlayed his love for bikes and the open road into a successful career, selling and building custom motorcycles for Hollywood’s elite at the world-renowned Bartel’s Harley Davidson.

Medvetz became a member of the notorious Hells Angels motorcycle club and traveled all over the world with the club, experiencing some of the his most memorable adventures. On September 10, 2001, Medvetz was racing his motorcycle through the San Fernando Valley when he was hit by a truck in a catastrophic accident that left him physically devastated, partially paralyzed and fighting for his life. His injuries required eight surgeries to save his foot—which doctors feared needed to be amputated—two metal plates and twenty screws to repair his cracked skull, a nine hour surgery to repair his shattered back with a titanium cage, plates and screws to put his knee back together and additional surgery to fuse his finger. He was not expected to walk again or to fully recover. 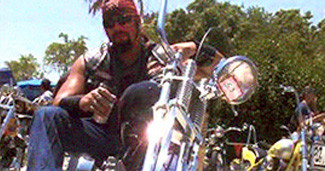 On September 11, 2001, just moments before the planes hit the World Trade Center, Medvetz awoke in the ICU on life support, alone and in pain. His room crowded with doctors and nurses, all riveted to the burning buildings of his former home on the screen. The world had changed forever— and so had his.

For six long months Medvetz struggled to regain the use of his legs, work through excruciating pain, and find some meaning in his life. He was adrift and not accepting the loss of his old body and his old life. One day in September of 2002, after a year long self destructive binge sitting in his one bedroom apartment in Hollywood, he looked up at his bookshelf and saw Jon Krakauer’s Into Thin Air wedged in the corner. The book was gifted to him four years earlier by a friend. After finishing the book, he vowed to climb Mount Everest one day. 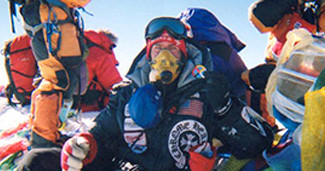 Thirty days later he gave up his apartment and booked a one way ticket to Nepal. Slowly and persistently, he began to put his body and his life back together by living amongst local Sherpas in the foothills of the Himalayas in preparation for his attempt of the summit of Mount Everest. It took him four years to train. Much of those years was spent climbing numerous peaks in the Himalayas, as well as boxing in a Muay Thai boxing camp in the south of Thailand to get back into fighting shape. Medvetz has climbed Mount Everest twice. One of his climbs was filmed by the Discovery Channel in a 14-part epic series, Everest Beyond the Limit, one of the highest rated shows on Discovery Channel.

After returning to Los Angeles, Medvetz once again found himself at a crossroads. He wanted to keep climbing and had proved to himself that nothing could stand in his way. Summiting Mount Everest on May 21, 2007 was about his own personal recovery, but he felt he needed a reason to continue— a purpose beyond his own personal satisfaction. Once again inspiration came from an unlikely place. A news broadcast on Veteran’s Day about disabled and disfigured returning veterans struck a familiar and powerful cord. Tim realized he had something to offer these brave soldiers and marines: the chance to put their lives back together through the challenge of climbing. Medvetz contacted all of his previous sponsors from his prior expeditions. His goal was to take a wounded veteran with him on his next climb. He realized that if he could renew his faith in himself on the summit of a mountain, he could help others do so as well. 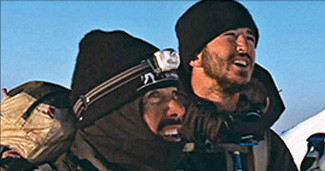 It did not take him long to raise the funds with the help of Chrome Hearts, Equinox Fitness Clubs, Cher Charitable Foundation, Eddie Bauer, and some private financial donors who always believed in him from the beginning. He embarked on two major expeditions in the summer of 2009 to Mount Kilimanjaro, Africa and Mount Elbrus, Russia with two injured war veterans. Medvetz, with his friend and cameraman, Ken Sauls, captured on video all the determination and perseverance of both heroes to provide inspiration and hope for future returning injured soldiers to watch.

Reach out to Tim Medvetz, at Tim@TheHeroesProject.org.